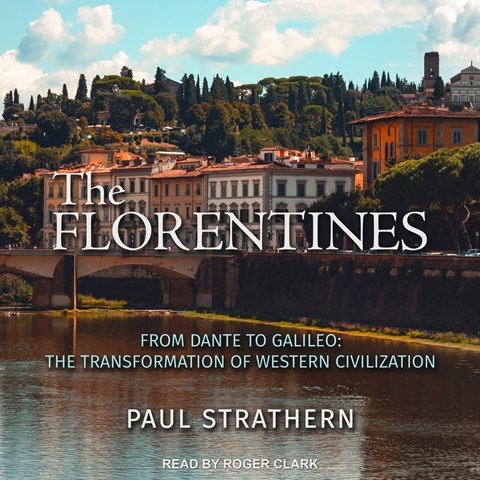 THE FLORENTINES From Dante to Galileo: The Transformation of Western Civilization

Like a deep-voiced Oxford don, narrator Roger Clark passionately describes Renaissance Florence from the birth of Dante in 1265 to the death of Galileo in 1642. Historical giants such as Michelangelo, Leonardo da Vinci, Machiavelli, and Lorenzo the Magnificent thronged the narrow streets. Painting gained perspective. Prayer gave way to logic. Our world was born, but it was a bloody delivery. War, rebellion, and religious extremism lit up a city that was sucker punched by the Black Death. "Those who do not learn history are doomed to repeat it," we were taught. Despite Clark's superb presentation, history seems to be repeating itself. Galileo was forced to recant. Are we standing with Dante then, about to follow Virgil into hell? I trust Clark will come along. Great pipes. Nobody can say "haughty" with more hauteur. B.H.C. © AudioFile 2021, Portland, Maine [Published: OCTOBER 2021]