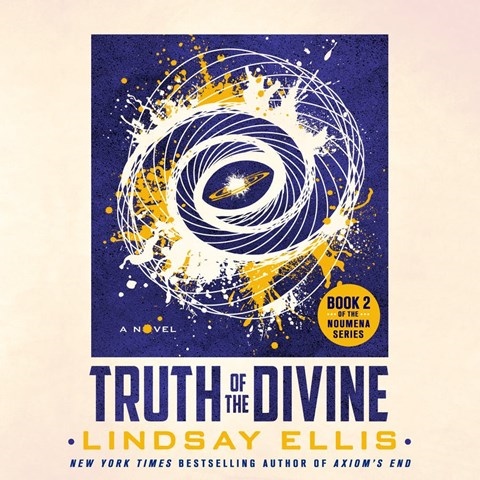 TRUTH OF THE DIVINE Noumena, Book 2

Abigail Thorn, Stephanie Willis, Kaveh Taherian take turns narrating this sequel, set in an alternate reality in which aliens have landed and President George W. Bush has covered it up. Willis leans into her performance, emoting each syllable intensely, as though it were her final breath. Her urgency engages the listener so much that hitting pause seems impossible. Taherian, who portrays several male characters, and Thorn, who narrates the news reports, give the listener an emotional respite. Thorn steals some of the spotlight as she has so many distinct characters and points of view to convey that listeners will not realize they are all done by the same person. Listeners shouldn't make any plans once they hit play on this fast-paced, emotionally fraught audiobook. A.R.F. © AudioFile 2021, Portland, Maine [Published: NOVEMBER 2021]