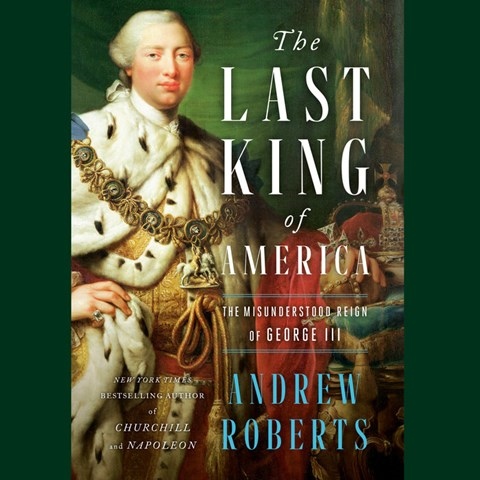 THE LAST KING OF AMERICA The Misunderstood Reign of George III

Britain's George III reigned when America dumped the tea and became the United States. Most Americans think of him as a tyrant or a buffoon, but that is far from fair or accurate. In fact, he was an early model for the role of constitutional monarch, compassionate and an opponent of slavery. This audio biography offers an in-depth portrait of a king who was often undercut by his advisers. Narrator Philip Stevens's English accent adds ambiance without overwhelming the work for American listeners. For direct quotes, he adopts a slight German accent to reflect George II's Hanoverian background and a slightly louder volume for George III and other strictly English-speaking figures. Stevens's pacing makes the straightforward text easy to follow, and he varies his tone to suit the material. R.C.G. © AudioFile 2022, Portland, Maine [Published: JANUARY 2022]