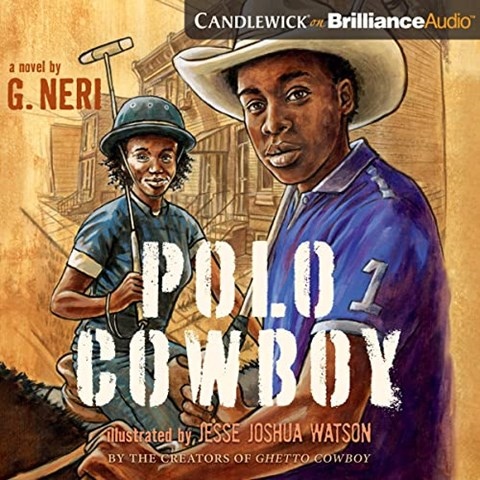 James Shippy narrates this sequel to GHETTO COWBOY (2011), which is the basis for the new Netflix movie CONCRETE COWBOY. Now 14, Cole returns to his father's home in Philadelphia's Black cowboy community. To pay off a debt, Cole's father commits Cole to work the summer as a stable boy, caring for polo ponies at a military academy. Shippy strikes a realistic balance between a gritty teen in a tough neighborhood and a thoughtful kid trying to do the right thing. White polo players bully Cole and Ruthie, the academy's only Black cadet. Shippy portrays these players as snobbish but not so awful as to be irredeemable. Cole learns to like and play polo but struggles to bridge his two worlds. Other characters include a smooth-talking drug dealer and a host of elderly Black cowboys. L.T. © AudioFile 2021, Portland, Maine [Published: NOVEMBER 2021]