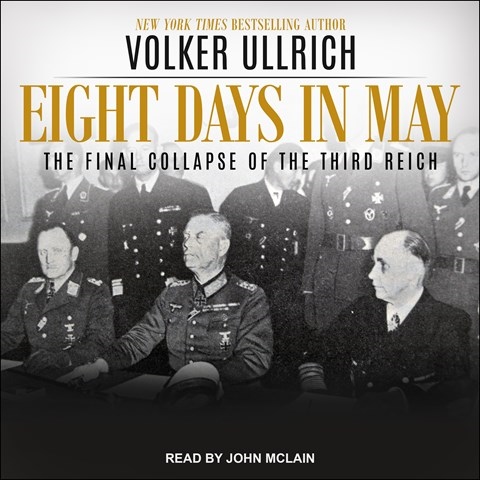 EIGHT DAYS IN MAY The Final Collapse of the Third Reich

John McLain's tough reportorial voice makes him an effective narrator for this history of the last eight days of the Nazi regime, which ranges from the suicide of Hitler to the final surrender of troops. Like a vintage newscaster, McLain advances from one theater to the next in a series of dramatic vignettes, his voice steady as the memorable scenes unfold. Many are terrible and stark in detail, and while the voice is firm, the underlying emotion is plain. Ullrich, a leading German historian of Hitler and the Nazi era, highlights the effects of defeat on the general population, a event in history many times depicted, but rarely with such breadth and vividness. D.A.W. © AudioFile 2022, Portland, Maine [Published: JANUARY 2022]