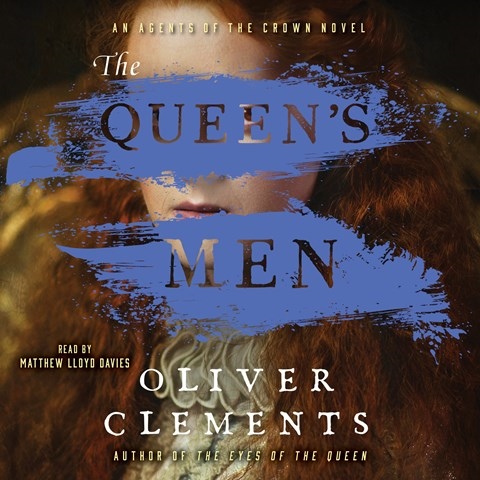 THE QUEEN'S MEN Agents of the Crown, Book 2

Matthew Lloyd Davies offers an absorbing narration of this second in the Agents of the Crown series. Queen Elizabeth I's caravan is attacked by armed men, and the Queen barely escapes death. An embarrassed Francis Walsingham, the Queen's spymaster, had no intelligence about a possible attack. To find the would-be assassins, Walsingham must rely on the Queen's favorite, alchemist Dr. John Dee. As he delivers devious plotting and graphic violence, Davies leaves no doubt that Dee is really the star of this convoluted story. With controlled gravitas, Davies brings together the ominous sighting of the Great Comet of 1577, the search for an ancient alchemical weapon called "Greek fire" to use against Spain, and the apocalyptic finale at the Queen's birthday celebration. Davies's performance enhances this action-packed adventure. S.J.H. © AudioFile 2022, Portland, Maine [Published: FEBRUARY 2022]