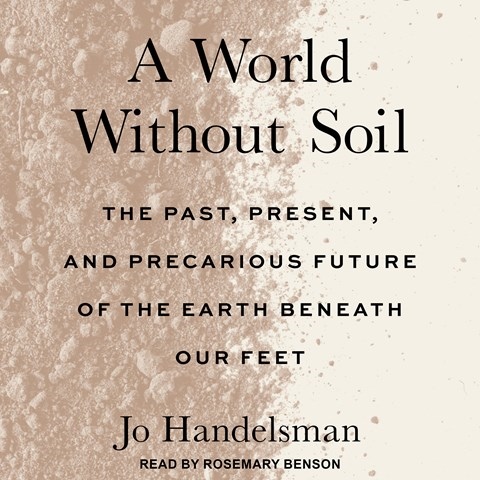 A WORLD WITHOUT SOIL The Past, Present, and Precarious Future of the Earth Beneath Our Feet

Narrator Rosemary Benson expresses alarm as she delivers Jo Handelsman's plea for global and U.S. government action on the looming soil crisis. The audiobook is the "memo" Handelsman would like to have sent President Obama while she served as a White House science adviser. Expressing clear concern Benson ticks off soil problems that include deforestation, erosion, and shortsighted farming practices around the world. She makes listeners hear Handelsman's fascination at seeing a legume grow from lava rock. She also brings a sense of high-stakes drama to a competition intended to help teach soil classification. Handelsman tells listeners that proper soil stewardship could alleviate climate concerns, even as we feed a growing global population. J.A.S. © AudioFile 2022, Portland, Maine [Published: FEBRUARY 2022]