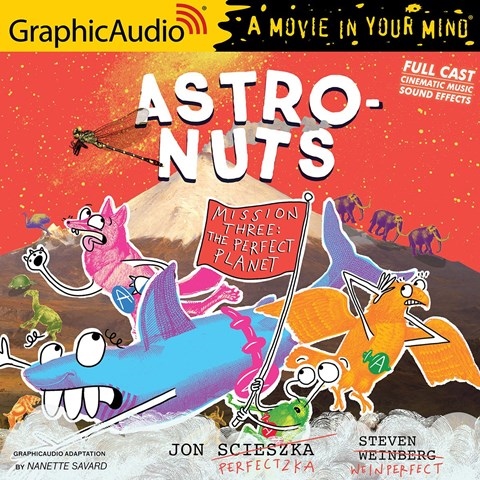 The space-age AstroNuts--SmartHawk, LaserShark, StinkBug, and AlphaWolf--are on their final mission in this trilogy: to change the past course of human behavior to save Earth from environmental destruction. This is a full-cast adaptation complete with futuristic sound effects and an often repeated "ba-dum-tish" drum effect signaling corny jokes. The large cast of Chris Stinson, Danny Gavigan, Dawn Ursula, Holly Adams, Ken Jackson, Nanette Savard, Richard Rohan, Terence Aselford, Tia Shearer, Rob McFadyen, and Robb Moreira deliver a range of characters, including the put-upon Earth, the decisive-sounding SmartHawk, two kind and caring cave dwellers, and the selfish, loose-cannon personality of AlphaWolf. This is an incongruous mix of sci-fi adventure, slapstick comedy, and random facts. L.T. © AudioFile 2022, Portland, Maine [Published: MARCH 2022]