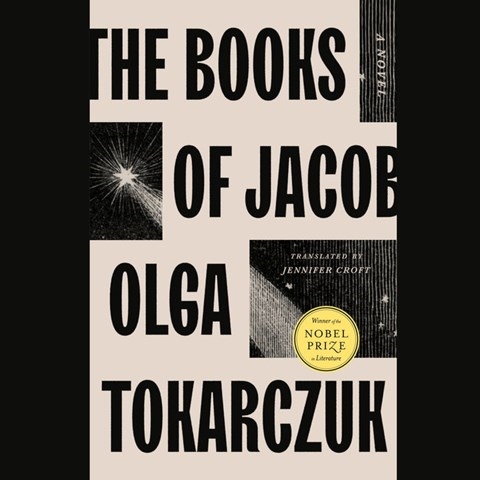 THE BOOKS OF JACOB

Narrated with clarity and poise by Gilli Messer and Allen Rickman, this audiobook takes more than 35 hours but is worth it. Messer masterfully portrays the characters, delivers Hebrew authentically, and uses accents--Yiddish, Polish, and German--elegantly. Written by Polish Nobel laureate Olga Tokarczuk, this sprawling historical novel set in the eighteenth century tells the extraordinary story of Jacob Frank, a messianic figure who led a rebellion called the anti-Talmudists and was variously considered a holy man, sensualist, and charlatan. He led a group that converted to Islam, then Christianity, all the while holding on to some of their Judaic practices. The novel teems with unique characters--including a spiritual presence named Yenta who omnisciently hovers over the proceedings. Long but outstanding and compelling. A.D.M. Winner of AudioFile Earphones Award © AudioFile 2022, Portland, Maine [Published: FEBRUARY 2022]