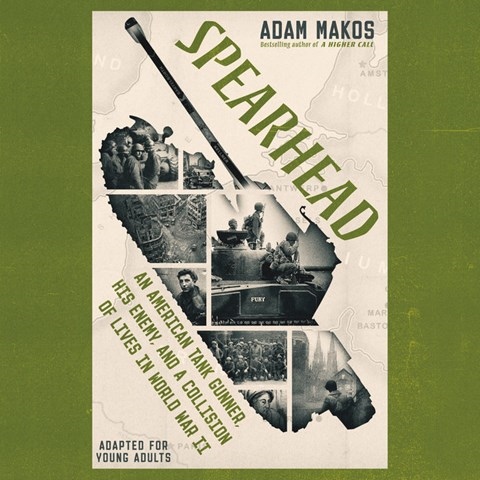 SPEARHEAD (ADAPTED FOR YOUNG ADULTS) An American Tank Gunner, His Enemy, and a Collision of Lives in World War II

Narrator Johnathan McClain offers a propulsive reading of Adam Makos's true story of tank warfare during WWII. This young adult adaptation of Makos's bestselling work takes listeners behind enemy lines, focusing on 21-year-old American tank gunner Corporal Clarence Smoyer of the 3rd Armored Division and 17-year-old German tank crewman Private Gustav Schaefer. Both are caught up in a war they never could have imagined. McClain's gravelly voice seems tailor-made for this story, bringing an intensity that captures the heart-pounding nonstop action and mechanics of war. At the same time, he ably brings out the humanity of the soldiers--from "gentle giant" Clarence to Gustav, whose only wish is to be a train conductor. Listeners will be riveted by this gripping but sensitively told account. S.A.H. © AudioFile 2023, Portland, Maine [Published: JANUARY 2023]