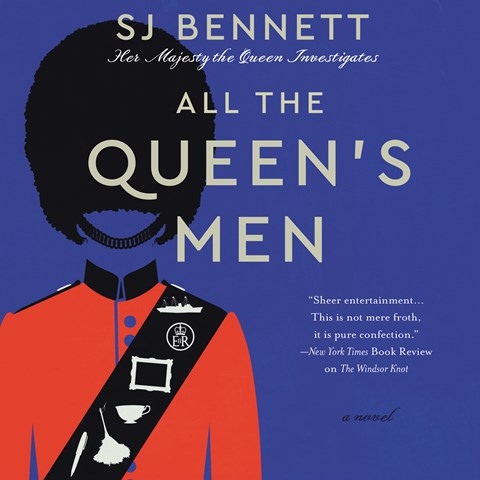 ALL THE QUEEN'S MEN Her Majesty the Queen Investigates, Book 3

In 2016, hot on the heels of her last investigation, and on top of Brexit, a new prime minister, and a surreal U.S. election, Queen Elizabeth II must deal with a body found at the palace. Narrator Jane Copland is perfection. She seamlessly switches between voicing men and women and between posh and flat south London accents in this fast-paced mystery, which blends fact and fiction. A staff member's death is thought to be a tragic accident, but an investigation reveals plenty of motives for murder. Meanwhile, the queen's private secretary, Rozie, inquires how the Royal Navy came to possess one of the queen's paintings. To add another dramatic element, multiple palace staffers are receiving threatening letters. What--if any--are the connections among these crimes? A.L.C. © AudioFile 2022, Portland, Maine [Published: APRIL 2022]