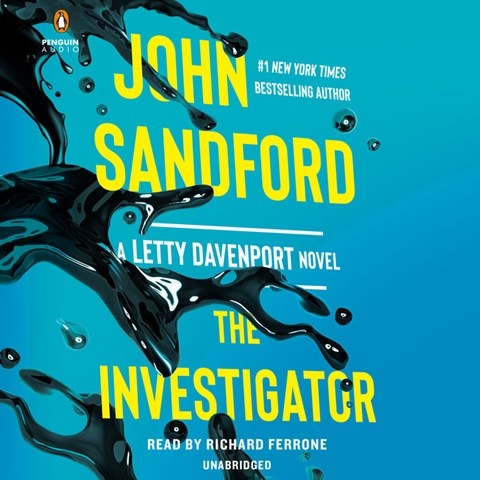 Richard Ferrone, the gravelly voiced narrator of the long-running Lucas Davenport series, performs the debut of a new tough, smart, funny Davenport--Letty, the adopted daughter of Lucas and his wife, Weather. Letty, just 24, is sent with her partner, John Kaiser, by the Department of Homeland Security to investigate what's behind some disappearing Texas oil. A militia is involved, and things get ugly pretty quick. Ferrone is excellent with voices, and his sometimes laconic tone draws the listener into the story and emphasizes the humor involved. Letty and Lucas have much in common, and some listeners may find that having Ferrone narrate both series makes these characters too similar. That should not deter listeners, though. Having a new Davenport audiobook is never a bad thing. G.S. © AudioFile 2022, Portland, Maine [Published: MAY 2022]