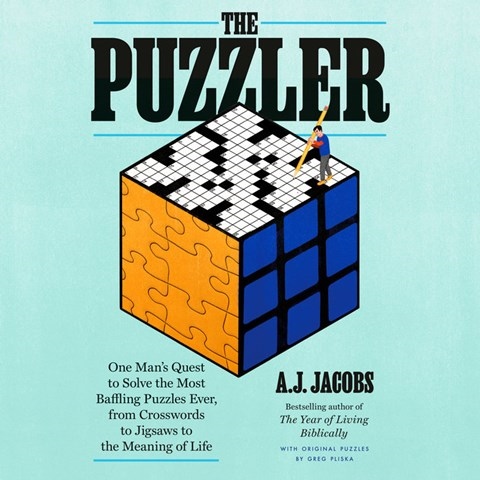 THE PUZZLER One Man's Quest to Solve the Most Baffling Puzzles Ever, from Crosswords to Jigsaws to the Meaning of Life

A.J. Jacobs knows puzzles--he's even been a NEW YORK TIMES Crossword answer. Nevertheless, with self-deprecating humor he lets listeners commiserate with his frequent frustration over the most demanding puzzles. That's good because listeners will be stumped by the audio-exclusive teasers at the end of each chapter. They're fun--but harder to do on audio. Listeners' struggles make it even easier to laugh along with Jacobs's misadventures--such as his effort not to come in last at a jigsaw competition and his unorthodox technique with a Japanese puzzle box. There's a pdf with puzzles from the print edition and a prize puzzle open until May 3, 2023. Not a puzzler? Jacobs reminds everyone that the NEW YORK TIMES criticized the crossword craze before finally joining it in 1942. J.A.S. © AudioFile 2022, Portland, Maine [Published: JUNE 2022]