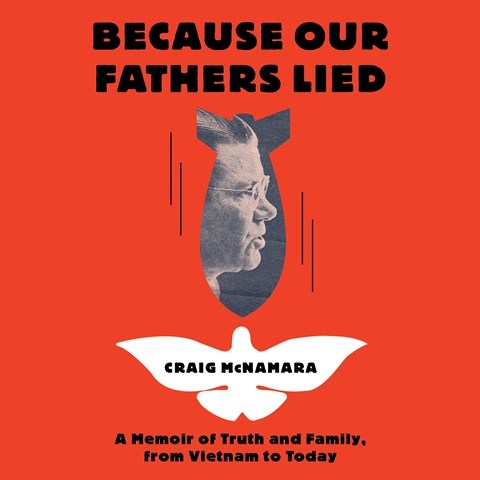 BECAUSE OUR FATHERS LIED A Memoir of Truth and Family, from Vietnam to Today

Craig McNamara hung the American flag upside down in his room. He demonstrated against the war in Vietnam, the war his father managed, but Robert McNamara's son is never strident. Narrator Keith Sellon-Wright continues in the precise but only slightly modulated tones the author establishes reading the introduction. There is yearning in this grown boy's voice--but never rage. Politically involved, and an admirer of Fidel Castro, Craig found his way through activism that blossomed into agriculture in general and walnuts in particular. "Craig's dream is to save the world through farming," his father said. As for the condemnation that Craig himself won't make, this listener can't help but wonder how much less suffering there might have been if the more famous and powerful of the McNamara men had planted trees instead of coffins. B.H.C. © AudioFile 2022, Portland, Maine [Published: APRIL 2022]