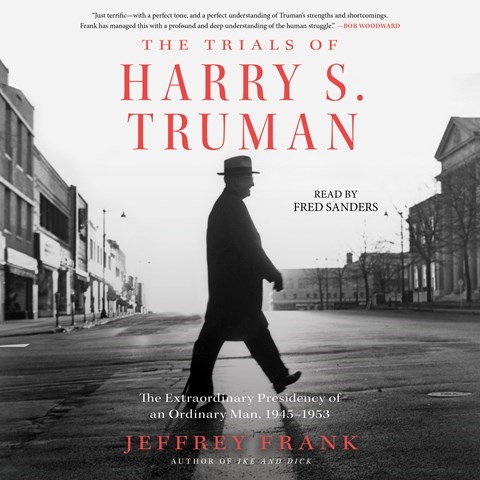 THE TRIALS OF HARRY S. TRUMAN The Extraordinary Presidency of an Ordinary Man, 1945-1953

Fred Sanders narrates this absorbing biography with the reverence and vocal charm it deserves. Listeners can relax as they take in the mid-century president's life and times because Sanders is a nuanced interpreter with a wonderful pitch and phrasing palette. Truman was a complicated man. As vice president, he let his homespun manner take a back seat to Roosevelt's outsized charisma, and as president, he revealed a fascinating mix of wisdom and naïveté during turbulent times. The self-educated Missouri farm boy also had a knack for communicating with ordinary people, which helped his reputation survive tests of his authority and competence. Fred Sanders's performance makes this a most enjoyable way to learn about Truman and the critical challenges our country faced during his presidency. T.W. © AudioFile 2022, Portland, Maine [Published: JUNE 2022]