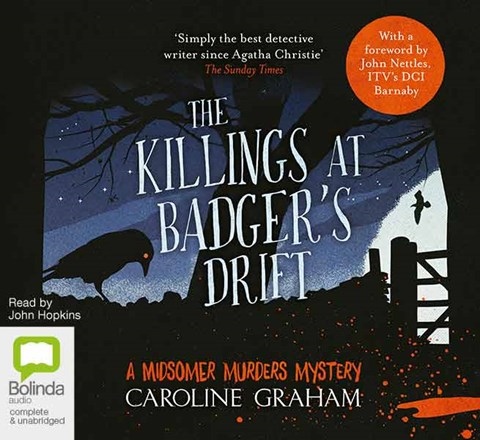 John Hopkins performs this first in the Midsomer Murders series. Published in 1987, the novel offers a complicated mystery with multidimensional characters and murders galore. With his sensuous baritone, Hopkins draws listeners into the tiny hamlet of Badger's Drift, where DCI Barnaby and DS Troy investigate an elderly woman's murder. Hopkins is quietly intense while the body count grows. As his soft-spoken Barnaby interviews suspects, Hopkins smoothly reveals possible motives and would-be scandals. His portrayal of the opinionated Troy sounds appropriately callow. Elderly Miss Bellringer has plummy tones and posh diction. Hopkins also delivers amusing glimpses of Barnaby's homelife with his wife, whose only flaw is that she cannot cook. A terrific start to a new audio series. S.J.H. Winner of AudioFile Earphones Award © AudioFile 2022, Portland, Maine [Published: APRIL 2022]