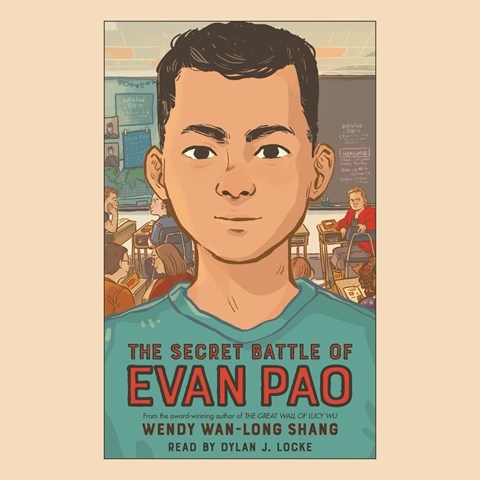 THE SECRET BATTLE OF EVAN PAO

Dylan J. Locke captures inner and outer views of Evan Pao's family and friends. When a scandal threatens and Evan's father vanishes, the family moves from California to a small Virginia town. The only Chinese-American boy in his new sixth grade, Evan circumvents his fears to match the cheer of a welcoming new friend, Max. Locke depicts Evan's liveliness. He also reveals Evan's anxieties and how his stomach turns in reaction to lies, bullying, and microaggressions. Locke also captures Evan's sister Celeste's sarcasm and his mother's measured, restrained responses to the racism they experience. Locke's strongest portrayal is of Evan's gentleness, a trait that triumphs over his class's ignorance about Chinese soldiers fighting in the Civil War, as well as their assumptions about people with Chinese backgrounds in the present. S.W. © AudioFile 2022, Portland, Maine [Published: SEPTEMBER 2022]