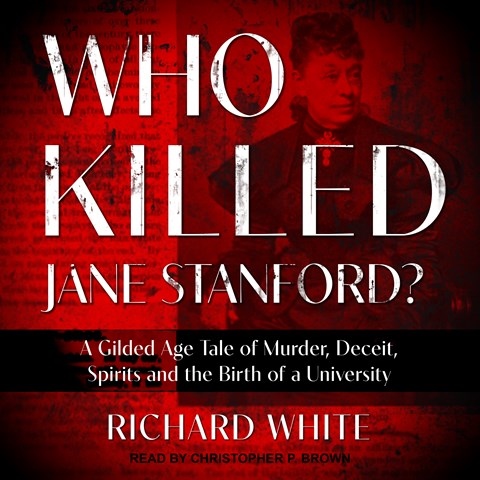 WHO KILLED JANE STANFORD? A Gilded Age Tale of Murder, Deceit, Spirits and the Birth of a University

Christopher Brown delivers a straightforward narration of this audiobook, which is subtitled "A Gilded Age Tale of Murder, Deceit, Spirits and the Birth of a University." The story features Jane Stanford, a most eccentric woman who was cofounder of Stanford University (1885) with her husband and who steered the institution after his death in 1893. Jane Stanford was murdered in Hawaii in 1905, just months after she escaped strychnine poisoning at home. Brown's performance is rapid-fire and barely inflected while reciting scary, often conflicting facts; memos; newspaper articles; court and medical reports; and secondhand conversations revolving around Jane and her household before and after her death. Eschewing accent and emotion, Brown's performance challenges listeners' to remain attentive to this intriguing, very cold, murder investigation. M.B.K. © AudioFile 2022, Portland, Maine [Published: AUGUST 2022]