Home»Reviews»VALENTINA SALAZAR IS NOT A MONSTER HUNTER 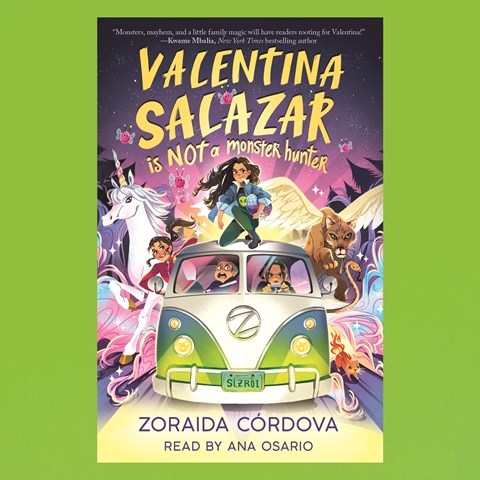 VALENTINA SALAZAR IS NOT A MONSTER HUNTER

Valentina Salazar is proud of her family's role as monster protectors, and narrator Ana Osario voices that family with distinct and vivid characterizations. Everyone is dealing with the death of Valentina's father in different ways: Her mom demands that they give up their nomadic, magical adventures; her brother, Rome, broods alone; her older sister, Lola, tries to be the perfect teenager; and her other sister, Andromeda, runs away to hunt the beast that killed their father. Valentina just wants them to work together again and fulfill their promise to return creatures to the mystical world they come from. Osario delivers a feisty and charismatic young heroine in a tiny package. Valentina demands listeners' attention as she leads them on a wild ride. S.T.C. © AudioFile 2022, Portland, Maine [Published: JUNE 2022]