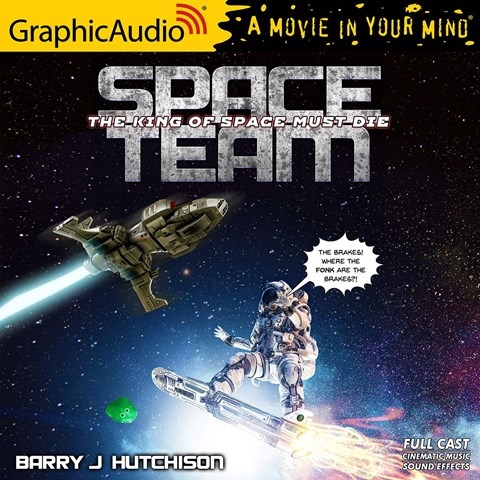 SPACE TEAM UNIVERSE 9 The King of Space Must Die

Phil Thron takes on the role of narrator of this zany adventure. The motley crew of the spaceship UNNAMED is attempting to kill Geronimus Krone, the King of Space. Cal Carver, performed by gravelly toned Danny Gavigan, leads his companions on their self-appointed mission. A talented cast of voice actors portray characters as diverse as a leprechaun, an intelligent computer, a mechanized being, a rocket engineer, and a solar-system-dominating tyrant. Thron's unemotional delivery contrasts perfectly with the frequently panic-stricken conversation among the crew. Creative cursing, background music, and sound effects add to the charm of this implausible space comedy, which includes time travel, the Four Horsemen of the Spacepocalypse, and a mission to save the universe. M.B.K. © AudioFile 2022, Portland, Maine [Published: JULY 2022]