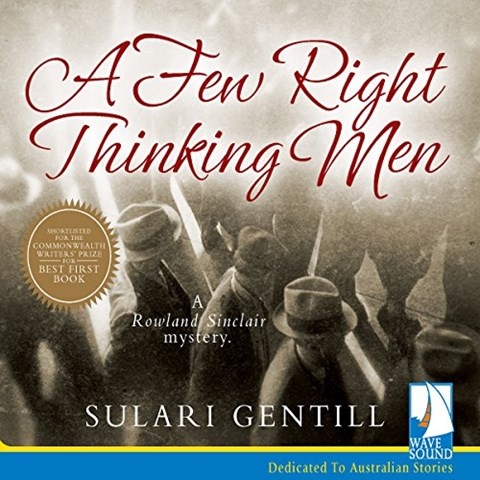 Narrator Rupert Degas offers a droll mystery set in Depression-era Australia. Degas grabs attention with a high-energy news report at the beginning of each chapter highlighting some social failure in conservative Sydney. Aristocrat Roland Sinclair's bohemian lifestyle and his artsy Communist-leaning friends alienate him from his older brother, Wilfred, and his "right-thinking" peers. When their Uncle Rowly is bludgeoned to death in his home, Roland infiltrates an extreme right-wing group to get closer to discovering his uncle's murderer. Degas's accents are amazing, offering subtle differences between upper-class and working-class Australians. As the Communist Party's popularity grows, its members certain they will soon succeed in a takeover, a group of wealthy men plan violence. Conversations outlining ideologies are kept lively by Degas's intelligent and understated performance. S.J.H. © AudioFile 2022, Portland, Maine [Published: JUNE 2022]