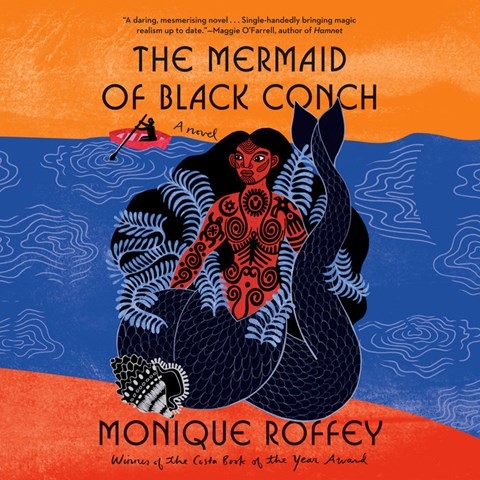 THE MERMAID OF BLACK CONCH

Caribbean accents from narrators Ben Onwukwe and Vivienne Acheampong animate this compelling story inspired by the Taíno legend of Aycayia, who is cursed to exist for eternity as a mermaid. The lonely creature lives in exile for centuries until one day, brutally captured by sports fishermen near Black Conch Island, Aycayia finds herself on land again. Rescued by David, a local fisherman who plans to return her to the sea, she transforms back into a woman--with bittersweet repercussions. Onwukwe performs the third-person narration in deep, resonant tones interspersed with vivid characterizations of the colorful supporting cast. His delivery of David's journal entries adds pathos and a raw intensity that is enhanced by Acheampong's emotional bursts of Aycayia's thoughts. These are expressed in free-verse poetry. S.A.A. © AudioFile 2022, Portland, Maine [Published: AUGUST 2022]