Home»Reviews»INNKEEPER CHRONICLES 4: SWEEP OF THE BLADE 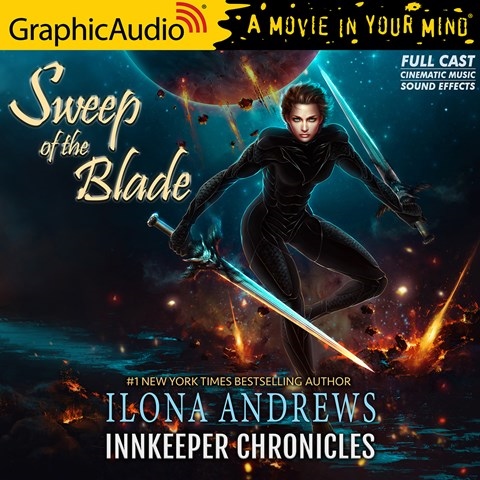 INNKEEPER CHRONICLES 4: SWEEP OF THE BLADE

Karen Novack and a full cast narrate the spellbinding fourth installment of the Innkeeper Chronicles, which involves intrigue and lots of swashbuckling scenes on the vampiric planet House of Krahr. Megan Dominy voices Maud Demille, the human daughter of Innkeepers, with cultured tones. Maud is gifted with magic and superior sword skills. Her 5-year-old daughter, Helen, a fierce vampire/child complete with growls and snarls, is convincingly played by Samantha Turret. Stern Lord Arland, marshal of the House of Krahr, is acted by Alex Hill-Knight. All are backed by a talented full cast. The House of Krahr must defend its dominance against rival houses while at the same time hosting a wedding. Multiple attempts on the lives of Maude and Helen and numerous bloodthirsty battle scenes are accompanied by music and graphic sound effects, captivating listeners to the last syllable. M.B.K. © AudioFile 2022, Portland, Maine [Published: OCTOBER 2022]