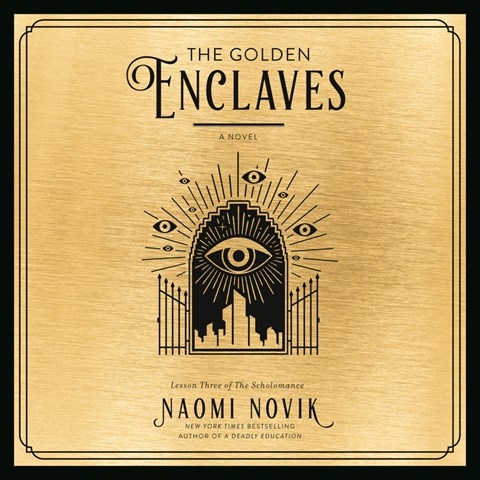 THE GOLDEN ENCLAVES The Scholomance, Book 3

Narrator Anisha Dadia chronicles teen witch El's final adventure. Formerly, El and the other students escaped the deadly Scholomance Academy, but her love interest, Orion Lake, fell in the battle. Now the school's ageless carnivores are attacking wizard enclaves worldwide. Dadia is believable as a teenage heroine, full of impassioned snark at the stupidity of the magical world leaders. She gives El's friends, Liesl, Aadhya, and Liu, distinct voices with accents. But as El travels the globe, battling soul-sucking mawmouths, Dadia struggles to maintain the same story cohesion that El's years at the Scholomance had. At times, El's extended monologues on wizard technique and history verge on recitation. However, Dadia does give El a definitive identity as a half-Welsh, half-Indian witch with an outsider's perspective. C.A. © AudioFile 2022, Portland, Maine [Published: OCTOBER 2022]