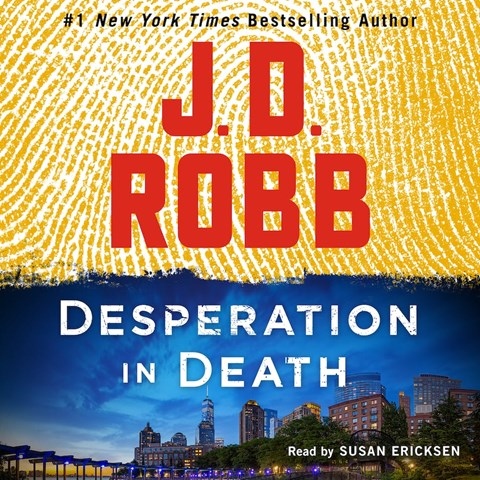 DESPERATION IN DEATH In Death, Book 55

J.D Robb's latest futuristic thriller finds Eve Dallas hunting for the people who kidnap young girls, train them as consorts for men, and auction them to the highest bidder. Narrator Susan Ericksen's performance vibrates with energy as she portrays old and new characters in this series. Mina and Dorian are victims of the crime ring: one's dead, one's missing. Ericksen's portrayal of Dorian's mother is stunning. Eve investigates her because she has continued to collect her "professional mother" stipend but never filed a missing person report when Dorian ran away. Ericksen's venom gives listeners an authentic look at this coldhearted dragon. Fans of the series will appreciate Ericksen's masterful development of old and new characters in this latest Eve Dallas novel. E.E.S. Winner of AudioFile Earphones Award © AudioFile 2022, Portland, Maine [Published: SEPTEMBER 2022]