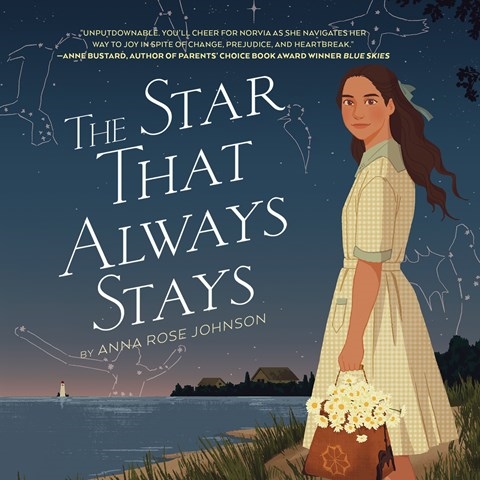 THE STAR THAT ALWAYS STAYS

Narrator Elise Randall Modica brings heart to this story, set in Michigan in 1914. Fourteen-year-old Norvia Nelson's early memories of life on Lake Michigan's Beaver Island sustain her in Boyne City as she struggles to accept her parents' divorce and her mother's remarriage. Because her now-estranged Pa had scorned their Ojibwe heritage, Ma says not to reveal it to her stepfather. Modica, who is Ojibwe herself, captures the Anishinaabemowin-inflected cadences of Norvia's elders. Other stand-out characterizations include Norvia's indomitable little sister, her endearingly pompous new stepbrother, and her unremittingly kind stepfather. Norvia emerges as a determined girl who draws on stories and books, as well as her Christian faith, to reconcile the past and present and to embrace the future. This domestic charmer hums with love. V.S. © AudioFile 2022, Portland, Maine [Published: NOVEMBER 2022]