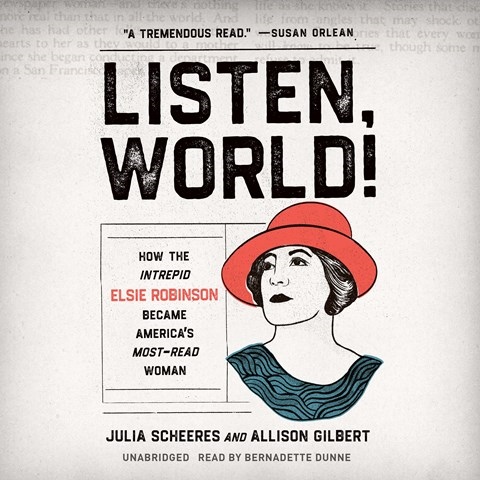 Elsie Robinson, a journalist whose early years were filled with adventure and hard times, became one of the highest paid female writers in the early twentieth century. In this audiobook we learn that 20 million people read her syndicated column, "Listen, World!'' Her novels, poems, and memoir were also highly successful. While her personal life was tragic, she talked about it in a way that touched many of her readers. Narrator Bernadette Dunn's voice sounds like that of a 1940s newscaster. Those interested in women's early struggles to break into the professional world will enjoy this biography. More broadly, listeners will enjoy hearing about Robinson's fictional depictions of frontier life during the Gold Rush, as well as her writing on the beginnings of William Randolph Hearst's media empire. L.W.S. © AudioFile 2023, Portland, Maine [Published: JANUARY 2023]