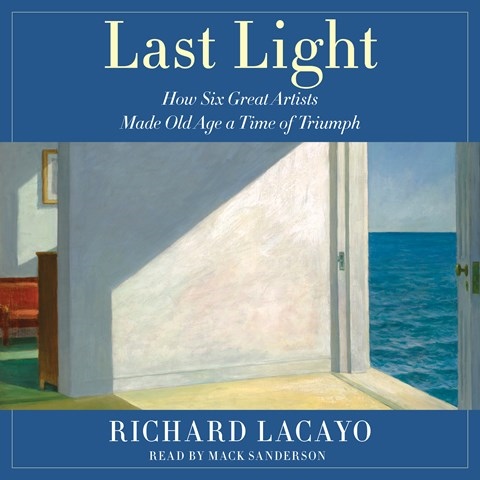 In straightforward style, narrator Mack Sanderson delivers biographies of six famous artists who have nothing in common except that they lived and worked well into old age. With his resonant voice and perfect diction, Sanderson takes the listener into the lives of Titian, Goya, Monet, Matisse, Hopper, and Nevelson. He lightens his tone for direct quotes from the artists and others, and offers French and Italian pronunciations for names and places. Written by a well-known art critic, this audiobook is notable for its emphasis on how the later works of each artist were influenced by earlier works and how advanced age led to the creation of their most famous masterpieces. Although the writing is descriptive, the listener will want to view images of the artworks discussed. J.E.S. © AudioFile 2022, Portland, Maine [Published: NOVEMBER 2022]