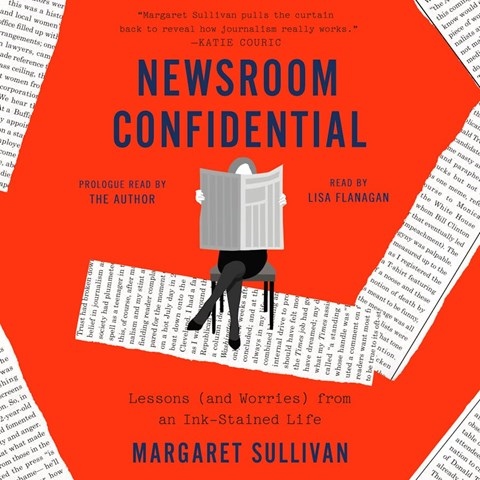 NEWSROOM CONFIDENTIAL Lessons (and Worries) from an Ink-Stained Life

Lisa Flanagan narrates journalist Margaret Sullivan's memoir/manifesto authoritatively. Flanagan speaks in a direct, straightforward style and alters her timbre only when imitating male voices. She captures Sullivan's spirited point of view--she's enthralled with her calling and appalled at the state of the media--and gives this important audiobook the seriousness it merits. Sullivan is a journalist's journalist. She was a longtime editor at the BUFFALO NEWS before becoming the first woman to serve as public editor at the NEW YORK TIMES. Following that she was the media critic at the WASHINGTON POST. Fearless at her craft, she has critiqued sacred cows like Bob Woodward and in her four years at the TIMES won a slew of fans for her candor. A.D.M. © AudioFile 2022, Portland, Maine [Published: NOVEMBER 2022]