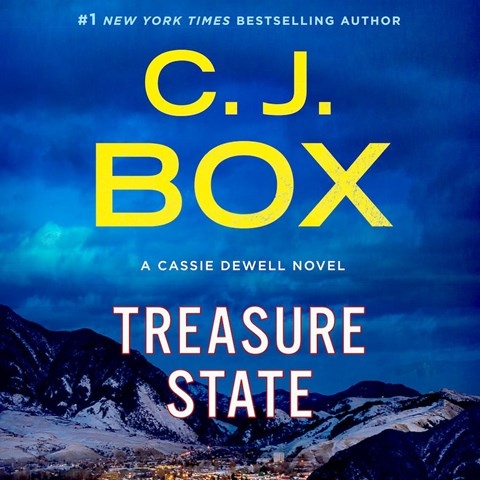 Christina Delaine returns to narrate Box's popular series featuring Montana P.I. Cassie Dewell. Delaine portrays Cassie's no-nonsense feistiness as she investigates two cases. An entitled Florida widow hires Cassie to pursue the handsome man who fleeced her of millions; Delaine's characterization of the wealthy woman warms as Cassie grudgingly finds her story compelling. Meanwhile, Cassie takes a phone call from an anonymous man who has published a strange poem promising that anyone can find the treasure chest of gold he has hidden in the wilderness. His voice sounds grandfatherly but shifty as he hires the P.I. to learn his secret identity, hoping she can't succeed. As Cassie chases down the two scoundrels, she and her team encounter new danger all around. N.M.C. © AudioFile 2022, Portland, Maine [Published: DECEMBER 2022]