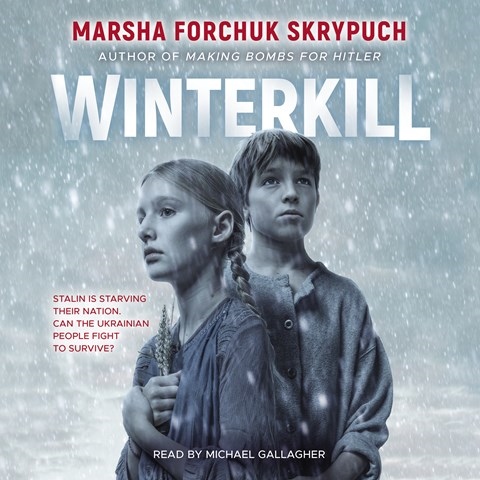 Narrator Michael Gallagher creates a determined voice for 12-year-old Nyl as his family experiences the horrors of Stalin's five-year-plan in 1930s Ukraine. When two Canadians, Comrade White and his daughter, Alice, arrive at their home to persuade them to join the collective and give up their farm, everything begins to change. Soldiers start to terrorize and kill Ukrainians who oppose Stalin's plan and people begin to starve. Gallagher captures the fear and anger Nyl carries with him through these trying times. Gallagher differentiates between characters, using a Ukrainian accent for Nyl and a Canadian accent for Alice. Listeners will be captivated by Nyl and his courageous efforts to escape the famine and inform the world of the devastation happening in Ukraine. M.D. © AudioFile 2023, Portland, Maine [Published: JANUARY 2023]