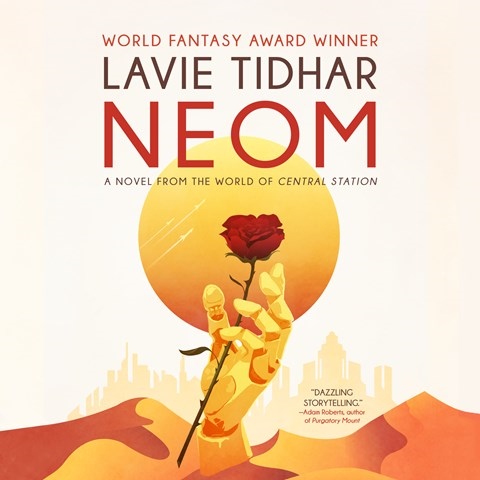 Neom is an actual planned smart city to be built by the Red Sea in Saudi Arabia. This audiobook imagines it in the far future, when it has become a global gathering place. Using an array of regional accents, Rasha Zamamiri capably brings those in Neom, human or otherwise, to life. Characters range from a native flower seller to a desert-dwelling boy who is seeking the stars, from a talking jackal to a rusty robot who drives much of the narrative. Although battered by a recent war, Neom remains a vibrant place, and Zamamiri brings that point home by animating its diverse inhabitants, who are drawn together by a mysterious golden man. Thanks to Zamamiri, this audiobook is a fascinating snapshot of a place and its people. D.E.M. © AudioFile 2023, Portland, Maine [Published: JANUARY 2023]