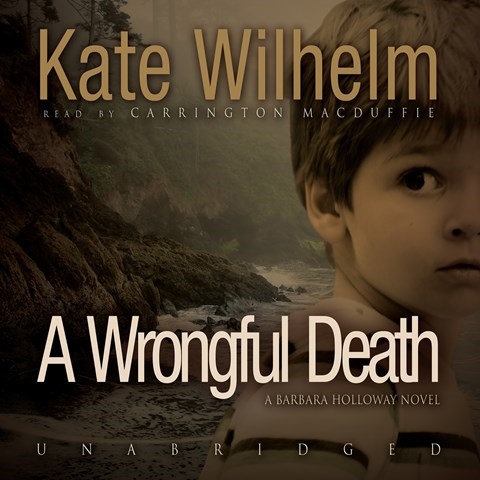 In the ninth Barbara Holloway suspense, DA Holloway retreats to a remote coastal cabin to avoid making a life-altering decision. There she encounters a seriously injured woman and her small son. When she goes for help, the two disappear. Carrington MacDuffie turns in a splendid performance as Holloway and the missing woman and child, Elizabeth and Jason Kurtz, who are on the run from a vicious family cabal. MacDuffie’s male characters are exceptional, particularly Holloway’s charming father, Frank. Her rich, cultured voice makes secondary characters multidimensional, and, when called for, her accents are precise and never overdone. Kate Wilhelm’s complex plot is filled with red herrings and surprises, and Carrington MacDuffie’s finesse makes this an audiobook not to be missed. S.J.H. Winner of AudioFile Earphones Award © AudioFile 2008, Portland, Maine [Published: FEB/ MAR 08]