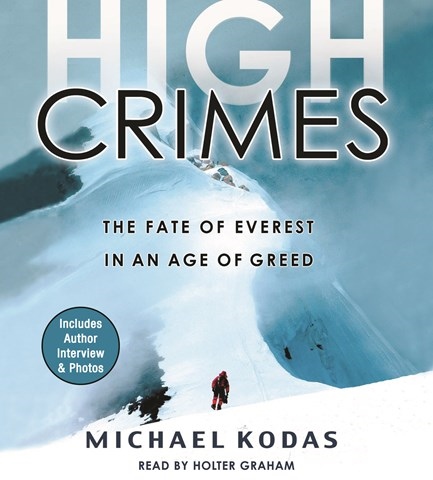 HIGH CRIMES The Fate of Everest in an Age of Greed

This fascinating work concerns the dark underworld that has grown out of the commercialization of Mount Everest. There's the story of the climber who was abandoned by his guide during an ascent and tales of scores of threats and assaults that have taken place on journeys to the world's highest peak. Providing listeners new insights into a largely unknown milieu, narrator Holter Graham offers a personal reading that captures the spirit of the tales, including reporter Kodas's account of his own trip to the top of Everest. Graham engages listeners as he makes each story as believable as it is thrilling. Listeners will find themselves shivering as they hear about bitter wintry nights and gasping for air as they climb higher and higher with Graham, who entertains to no end. L.B. © AudioFile 2008, Portland, Maine [Published: JUNE 2008]