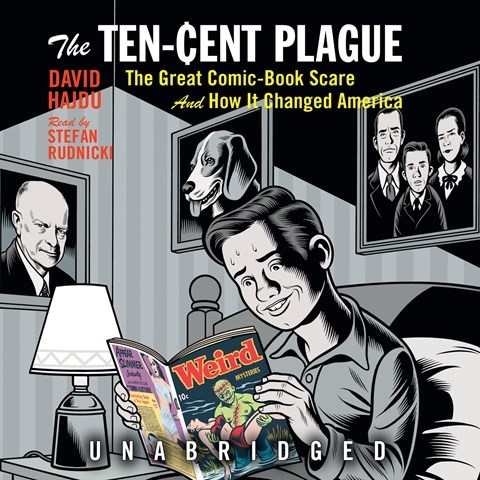 Thanks to narrator Stefan Rudnicki, other books on the history of comic books can't even touch THE TEN-CENT PLAGUE. Rudnicki's steely narration of the Great Comic Book Scare of 1953-54 will raise the hackles of any freethinking American. In the belief that comic books would engender antisocial behavior in young readers, a censorship campaign developed that ruined artists' careers and destroyed publishing companies. There was even a Senate hearing. With measured tones, Rudnicki delivers the author's answer to the question of how things could go so wrong in a country with so much. The book is outstanding, even for those who don't love comic books, because it demonstrates how the Baby Boomer generation first started questioning the values of their parents. Comics were crushed, but a few years later they were reborn better than ever. M.S. Winner of AudioFile Earphones Award © AudioFile 2008, Portland, Maine [Published: JULY 2008]