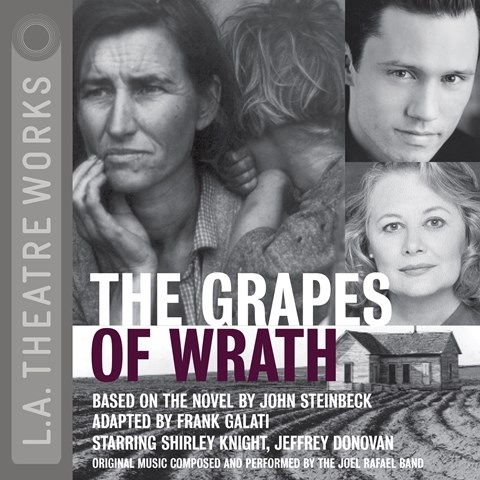 THE GRAPES OF WRATH

With a photographer's eye for honest detail and a musician's ear for the era's language and dialogue, John Steinbeck's Dustbowl epic of displacement, heartache, and hope became both a touchstone and lightning rod in American literature as soon as it was published in 1939. The novel continues to resonate and L.A. Theatre Works's full-cast performance of Frank Galati's Tony Award-winning stage adaptation hits all the high points. In this story of family and survival, Jeffrey Donovan provides a solid voice and foundation for the Prodigal Son figure, Tom Joad. Francis Guinan finds the wisdom and humor in the broken preacher, Jim Casey. And veteran Broadway star Shirley Knight shines as the matriarch, Ma Joad, bringing heart, soul, and tears to every line. A fine introduction to Steinbeck's world. B.P. © AudioFile 2009, Portland, Maine [Published: JANUARY 2009]