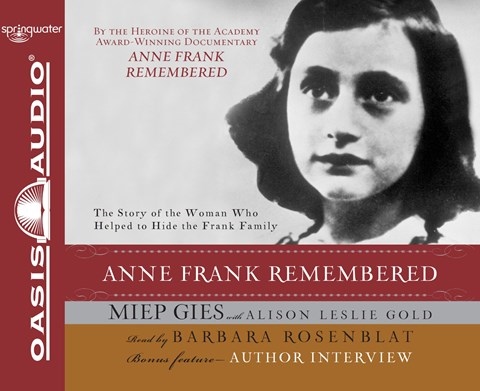 ﻿While most are familiar with Anne Frank’s diary, fewer remember the courage of the people who helped her family. Otto Frank’s employee, Miep Gies, coordinated the hiding place and worked through her own exhaustion and terror to keep the family safe and supplied with food and company. Barbara Rosenblat speaks with Gies’s own voice, bringing an impeccable Dutch flavor to her words and flawlessly pronouncing the many proper nouns of that challenging language. She effortlessly conveys Gies’s pervading sense of sadness tinged with frustration, anger, and resentment at the horrors inflicted by the Nazi regime. In the author’s afterword, Rosenblat captures equally well Gies’s acceptance and wonder at the way Anne’s story captured the heart of the world. Rosenblat’s performance easily captured ours. R.L.L. Winner of AudioFile Earphones Award, 2010 Audies Finalist, SYNC 2015 © AudioFile 2009, Portland, Maine [Published: SEPTEMBER 2009]