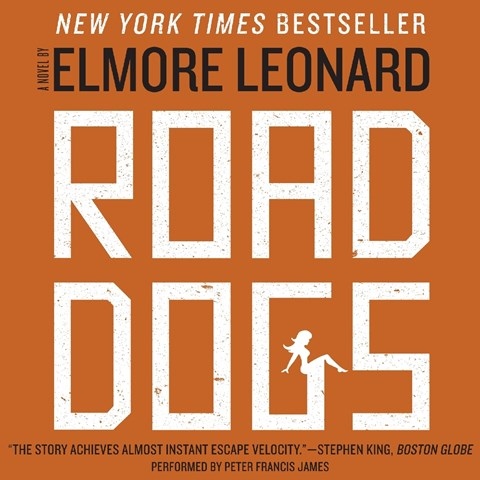 What if three memorable Elmore Leonard crooks—Jack Foley (OUT OF SIGHT), sexy psychic Dawn Navarro (RIDING THE RAP), and former go-go dancer and current mobster Cundo Rey (LABRAVA)—were neighbors in Venice Beach? Foley and Rey are ex-prison buds ("road dogs" in prison vernacular), and Dawn the psychic is Rey's common-law wife and the resident temptress. Add a Hollywood starlet and an overzealous FBI agent, and you've one of Leonard's best. Peter Francis James pulls off an interesting trick—his narrative voice (and the voice of Foley) is reminiscent of actor George Clooney, who is indelibly linked with the Foley character from the movie version of OUT OF SIGHT. And James’s voicing of the FBI agent sounds just like actor Dennis Farina, who played a retired agent in the movie. R.W.S. 2010 Audies Finalist © AudioFile 2009, Portland, Maine [Published: JUNE 2009]