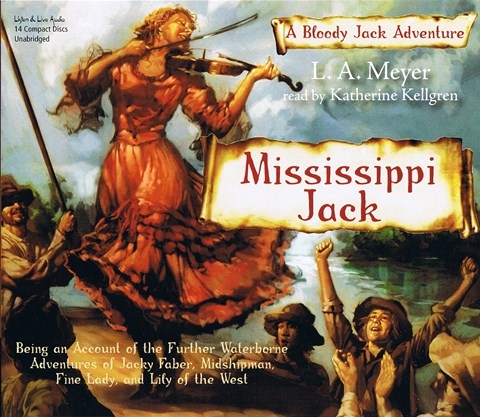 For rousing exploits and acts of derring-do, listen to this fifth Bloody Jack adventure. Once again faced with imprisonment and hanging, the unsinkable Jacky Faber escapes to the American wilderness, where she takes on legendary braggart Mike Fink, steals his flatboat, and turns it into a showboat offering revival meetings, a medicine show, and gambling. As Captain Jacky makes her way down the Mississippi to New Orleans, she fends off river pirates and "red Indians" and escapes hanging, tarring-and-feathering, and even a hurricane. Katherine Kellgren roars as Fink tries to capture and kill Jacky, purrs as Jacky attempts to sweet-talk her way out of a British brig, and sings period songs in a lovely crystal-pure voice. Kellgren's performance makes this must-listening. S.J.H. Winner of AudioFile Earphones Award, 2010 Audies Finalist © AudioFile 2009, Portland, Maine [Published: SEPTEMBER 2009]