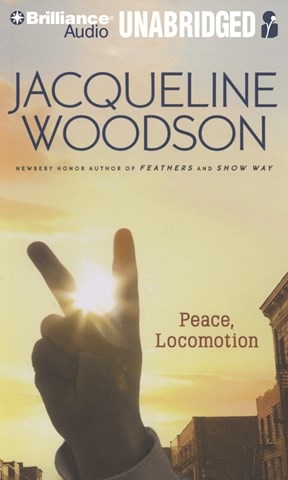 In her sequel to LOCOMOTION, Woodson's format has moved from poetry to letters in this epistolary novel. "Peace, Locomotion" is the sign-off of 12-year-old Lonnie Collins Motion in his letters to his younger sister, Lili. They’ve been separated by the foster care system since the death of their parents five years earlier in a fire. Dion Graham's mellow narration of Lonnie's life and letters is moving and amusing. Graham infuses the reading with Lonnie's sense of discovery as he copes with school, grief, missing his sister, watching her life evolve apart from him, and finally, helping his foster family cope with a tragedy of their own. In the end, Locomotion helps his foster brothers and mother find peace—"the good stuff that happens to all of us . . . sometimes." D.P.D. 2010 Audies Finalist © AudioFile 2010, Portland, Maine [Published: JANUARY 2010]