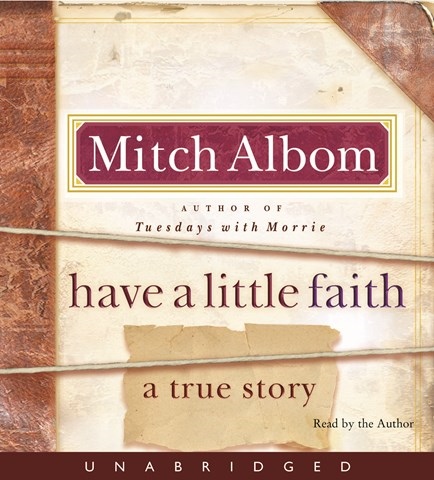 HAVE A LITTLE FAITH

Anticipating his own death, Albom's 82-year-old childhood rabbi asks him to write and deliver his eulogy. The request takes Albom back to his Jewish roots on a journey that contrasts differing faiths, ethnicities, races, and social classes. The book features a number of Albom’s experiences—from his friendship with an African-American ex-convict, now an inner-city pastor, to his uncomfortable public discussions of faith with his rabbi. Albom is a rare author who reads his own work with skill. He delivers seamless narratives that capture subtle insights about his life's purpose, the need for forgiveness, his loss of faith, and his newfound belief in something larger than himself. Creating rich characterizations of his friends in both his writing and his narration, he explores his own preconceptions and misgivings, among other difficult issues, as he rediscovers the importance of faith. G.D.W. © AudioFile 2010, Portland, Maine [Published: FEBRUARY 2010]