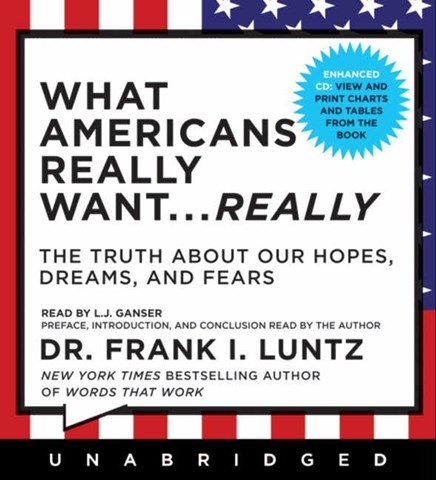 WHAT AMERICANS REALLY WANT . . . REALLY The Truth About Our Hopes, Dreams, and Fears

Americans are analyzed to death. Everything we do is quantified and used by some marketing firm to sell us something we may or may not really want. Dr. Frank Luntz offers insights into what we do want, and why. Narrated by L.J. Ganser (with an introduction delivered by Luntz), the book is a contemporary take on the material in THE HIDDEN PERSUADERS, Vance Packard's classic analysis of American consumers. Ganser reads with verve and a sense of curiosity, as though he’s as surprised by some of the findings as Luntz is. Ganser particularly relishes those moments when the book explains what we Americans think, rather than what some corporate hotshot thinks we should think. D.J.S. 2010 Audies Finalist © AudioFile 2010, Portland, Maine [Published: MARCH 2010]