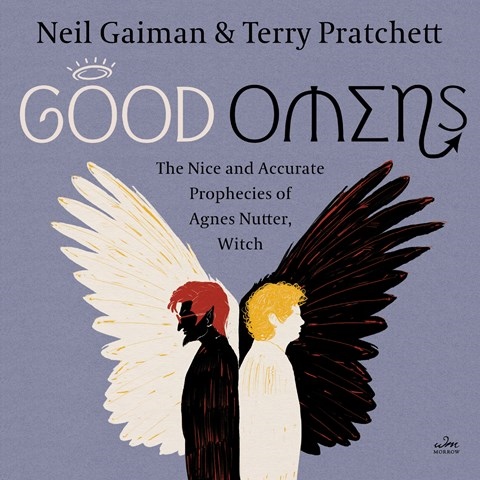 Who would have thought that the Apocalypse would be so entertaining? For the first time on audio in the U.S., this 1990 collaboration between authors Gaiman and Pratchett follows the (mis)adventures of Aziraphale, an angel, and Crowley, a demon, as they somewhat grudgingly take up their roles—along with all the hosts of heaven and hell—in precipitating the coming of the Antichrist. The thing is, the Antichrist has been . . . shall we say . . . "misplaced." Narrator Martin Jarvis's outstanding performance captures all of Aziraphale's British officiousness and all of Crowley's vaguely disinterested sarcasm. Jarvis also shines as he bounces from Sister Mary Loquacious to Scarlett Zuibiger to Adam Young, the 11-year-old would-be Antichrist, and so many others, with impressive ease. Moreover, Jarvis’s attentiveness to the authors' sense of timing and humor enables his performance to accentuate every twinge of irony in this absurd comedy. A.H.A. Winner of AudioFile Earphones Award © AudioFile 2009, Portland, Maine [Published: NOVEMBER 2009]