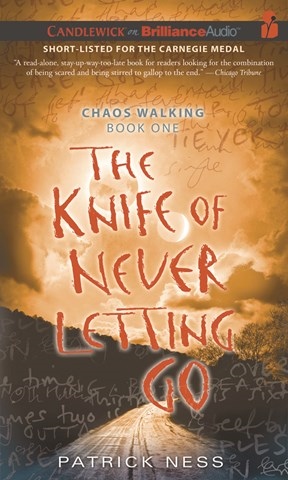 The first book of the Chaos Walking trilogy is a wild ride in a new world with some old problems. Patrick Ness built the world, but Nick Podehl pulls the listener into it through the embittered voice of Todd, a droll 13-year-old stuck in a community of men in which everyone can hear everyone else's thoughts. Now and then the book gives a sample of the audible cacophony. Todd and his dog, Manchee (whose thoughts are simple and doggish), find a hole of silence in the swamp—a girl. The trio—boy, girl, and dog—takes off, pursued by angry men, into a world much bigger than Todd imagined. Podehl's voice gradually becomes the safety bar we cling to as this roller coaster of bridge burning, space travel, and, yes, knife fights whips us around unexpected corners. The only problem is that the story ends in the middle of a sharp right angle. But that doesn't make it any less breathtaking. M.M.C. Winner of AudioFile Earphones Award © AudioFile 2010, Portland, Maine [Published: DECEMBER 2010]