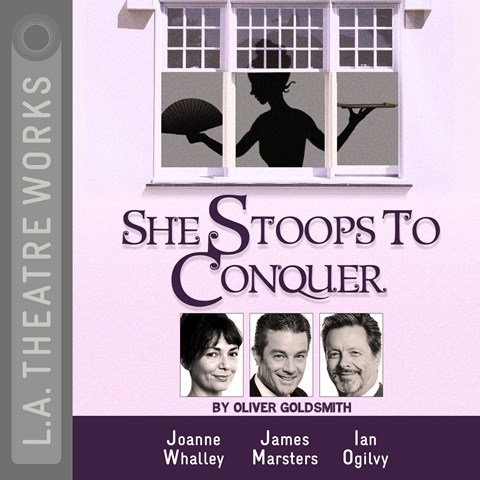 SHE STOOPS TO CONQUER

L.A. Theatre Works' dramatization of this late-eighteenth-century play remains strikingly relevant today with its satirical digs at sexism, class consciousness, and upper-crust wealth. James Marsters and Joanne Whalley lead the cast in an uproarious comedy of manners that is reminiscent of Shakespearean follies of mistaken identity, all the while championing womanly guile and intelligence. The energetic performers retain a peak level of hilarity throughout, with clear emphasis and enunciation. Divergent personas, played by a single character, can be easily identified, while comical asides to the audience are apparent by their ironic and lightly modulated delivery. Strange doings in an English country mansion are instigated by the arrival of misguided suitors whose passions are laced with bawdy schemes, deflated pretensions, and nonstop mischief. A.W. © AudioFile 2012, Portland, Maine [Published: JUNE 2012]