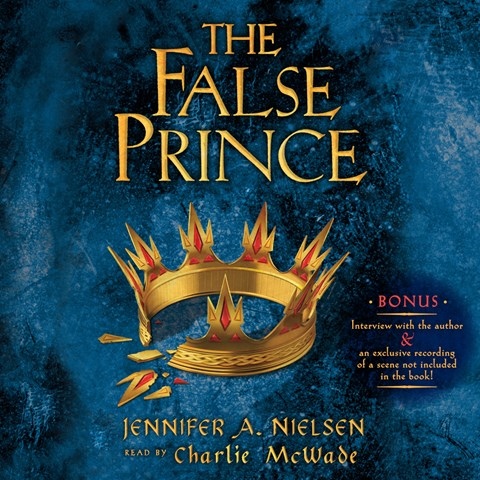 by Jennifer A. Nielsen | Read by Charlie McWade

In Volume One of the Ascendance Trilogy, Charlie McWade enacts the sometimes brutal transformation of Sage from roast-stealing teen orphan to prince and ruler of Carthya. McWade’s haughty tones for the ambitious regent Bevin Conner, who grooms the young orphan, contrast well with his thuggish portrayal of Conner’s creepy underling and with his depiction of the working-class Mrs. Trubeldy, of the orphanage. But when Sage is told to drop his foreign accent and sound like Carthian royalty, McWade’s one example is not cohesive, nor does his voice transform with his role. In endeavoring to evoke villainy, he has another regent sounding more like a foreign foe than a longtime royal. Despite these inconsistencies, McWade’s pacing and storytelling are strong and leave listeners awaiting the young king’s next adventures—which are hinted at in an ebullient author interview. D.P.D. © AudioFile 2012, Portland, Maine [Published: MAY 2012]