Home»Reviews»COURAGE HAS NO COLOR, THE TRUE STORY OF THE TRIPLE NICKLES 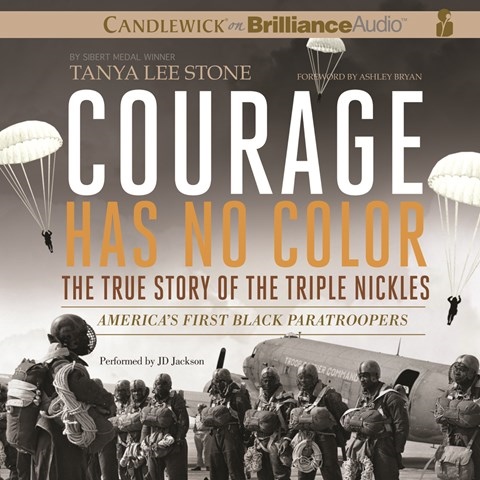 COURAGE HAS NO COLOR, THE TRUE STORY OF THE TRIPLE NICKLES America's First Black Paratroopers

Stone’s historical work describes what it meant to serve in WWII as an African-American soldier. JD Jackson’s performance melds with the text, further strengthening a solid piece of nonfiction. His pacing matches the moment, whether describing incidents of discrimination or the exhilaration of training to become the first black paratroopers. He highlights emotional peaks with short silences that let the listener live each experience before moving on. The story covers a lot of ground—from details of the Roosevelts to the internment of Japanese-Americans and the irony of African-Americans fighting for justice abroad while not being recognized as full citizens at home. Jackson’s smooth voicing buffs the edges of a few rough transitions. Notably, the book is introduced by African-American picture book writer/illustrator—and WWII vet—Ashley Bryan. A.M.P. SYNC 2015 © AudioFile 2013, Portland, Maine [Published: JANUARY 2013]