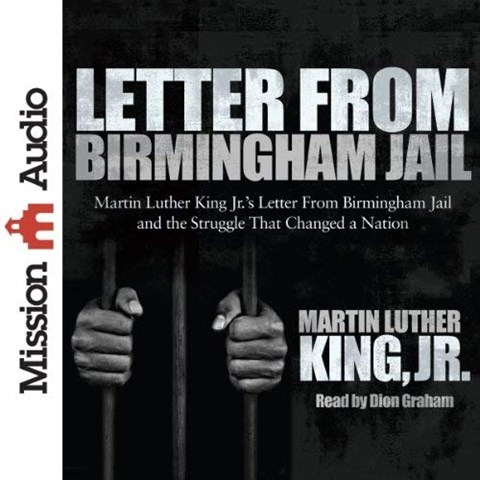 April 1963 found Reverend Martin Luther King, Jr., jailed in Birmingham, Alabama, for his leadership role in a Civil Rights protest there. Eight local religious leaders publicly admonished him for his participation, saying that it was particularly unseemly for a clergyman. The eloquence of the response King wrote from his cell, in which he defended "nonviolent, direct action" and argued against segregation, rings as clearly today as it did 50 years ago. Nobody can duplicate King's distinctive voice and presentation, but narrator Dion Graham presents this iconic document with a clarity and forcefulness worthy of its inspiring message. His rich voice, with hints of restrained anger and frustration, conveys King's driving passion for justice and equality. Historic value paired with a commanding presentation makes this brief audio a true gem. M.O.B. 2014 Audies Finalist © AudioFile 2013, Portland, Maine [Published: APRIL 2013]