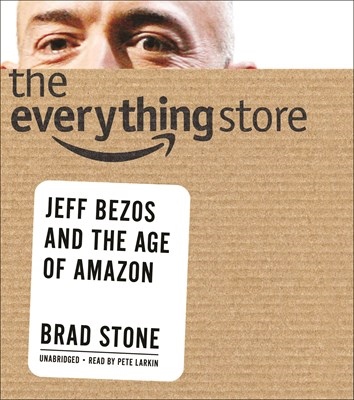 THE EVERYTHING STORE Jeff Bezos and the Age of Amazon

In an authoritative and evenhanded performance, narrator Pete Larkin steers this audiobook like he’s driving a big rig—staying in low gear for the first few chapters and then picking up speed as the Amazon enterprise morphs into a voracious behemoth. Larkin’s delivery matches the trajectory of the book—what starts out as a well-researched but fairly dry historical account of a retail start-up then veers into a complicated, slightly hellish tale of a predatory retailer that is not afraid to backstab competitors even while courting them. Founder Jeff Bezos, known for his exuberant optimism and keen business sense (“Worry about the customers, not the competitors,” he advises his troops), is also portrayed as a harsh, sometimes melodramatic taskmaster (“You’re ruining my life,” he tells an underling at a meeting). Of course, none of this should hurt Amazon’s bottom line, especially if you buy the audiobook from Amazon or from its wholly owned subsidiary, Audible.com. R.W.S. 2014 Audies Finalist © AudioFile 2013, Portland, Maine [Published: DECEMBER 2013]