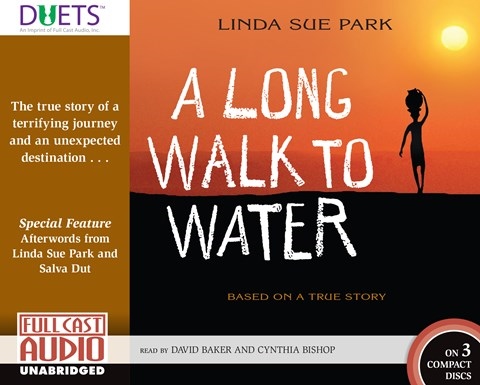 A LONG WALK TO WATER

A stirring performance by David Baker and Cynthia Bishop conveys the dramatic stories of two 11-year-old children who lived 10 years apart in war-torn South Sudan. Baker portrays the boy, Salva, with heartrending effectiveness. Skillful pacing and vocal modulation convey Salva’s terror and sorrow as he attempts to survive ruthless gunmen as well as dehydration, crocodiles, and lions on his dangerous trek to the safety of a refugee camp. By contrast, Bishop’s unrushed, almost meditative, narration brings out the girl Nya’s quiet resilience as she spends her day collecting water for her family. Sound effects highlight the thoughts of the characters, while a periodic drum beat and music set the scene of the African landscape. This production includes an author’s note as well as words by Salva himself, which echo the poignance of his story. M.F. Winner of AudioFile Earphones Award, 2014 Audies Finalist © AudioFile 2013, Portland, Maine [Published: OCTOBER 2013]